This Pear and Walnut Tarte Flambée tastes absolutely delicious and can be at your table in just about 30 minutes. It is vegan, loaded up with flavors and definitely will make your mouth water. Topped with pears, walnuts, figs and vegan goat cheese this sweet and savory recipe definitely makes the perfect recipe for your next dinner party!

Let’s be honest here.. Before I created this recipe, I had only tried savory french tarte flambée and never would have thought that fruit on it could be this delicious. This combo is definitely life changing for me and I will definitely make this recipe again in the future.

What is tarte flambée?

Tarte flambée is a french/german speciality that originally from Alsace, Saarland, Baden and Pfalz. It is characterized by a very thin bread dough and typically covered with cheese, crème fraîche, onions and ham. However, as none of these ingredients are originally vegan, I wanted to come up with a veganized version that tastes just as delicious. And trust me this recipe is a total winner!

How to make vegan tarte flambée?

Making vegan tarte flambée is actually not that difficult at all. The first step is choosing your crust. I actually used a whole wheat vegan crust that I bought from the store. You could also make it yourself easily, however sometimes when I am in a hurry or want a quick dinner, I find that making it myself can feel like a bit of a hassle.

Then it’s time to choose your toppings. I wanted to go for a sweet and savory tarte flambée so I layered some pears, walnuts, vegan goat cheese and figs onto it. As I said before I also used a store bought vegan goat cheese. The brand is violife and I can not recommend this cheese enough. It literally tastes like real goat cheese to me and it even melted perfectly! So if you can get your hands on it I would definitely highly recommend using it for this recipe! Then all there is left to do is baking it in the oven and you are ready to enjoy it!

Also, the great thing about this recipe is that you can get creative with it. So feel free to top your tarte flambée with any toppings of your personal preference. For example spinach, mushrooms, onions and tomatoes will work great too.

If you are looking for more dinner recipes, you might also like this Healthy Vegan Spinach Tomato Quiche or this delicious Japanese Tofu Katsu Bowl.

Finally, if you try this Pear and Walnut Tarte Flambée out yourself I would love to see you tag me on Instagram @aboutannella. I always love to connect with you and see your recreations! You can also follow me on Pinterest for more food inspiration.

This Pear and Walnut Tarte Flambée tastes absolutely delicious and can be at your table in just about 30 minutes. It is vegan, loaded up with flavors and definitely will make your mouth water. Topped with pears, walnuts, figs and vegan goat cheese this sweet and savory recipe definitely makes the perfect recipe for your next dinner party!
Course Main Course
Cuisine French, Vegan
Keyword Flambée, Savory, Sweet, Tarte
Prep Time 10 minutes
Cook Time 25 minutes
Total Time 35 minutes
Yield 4 servings

For the Vegan Crème Fraîche 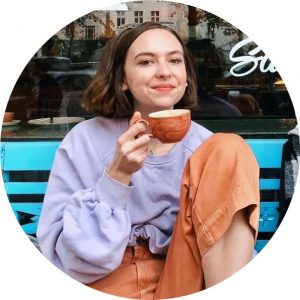 Hi, I’m Anna – and welcome to my little space on the interweb! I blog about fashion, food, lifestyle and more! In my free time, you will most likely find me exploring flea markets and art exhibitions, strolling around the city, practicing yoga or discovering new travel destinations.
Read more here…

Can u just not✨ #nottoday